Treble clef (G clef) guide: Everything you need to know

The treble clef is the best known and most commonly used clef. In this post, I explain everything you need to know about it and give you a few tricks on how to memorise the notes.
Table of contents

The treble clef, also known as "G clef", is undoubtedly one of the best known musical symbols. Of the seven existing clefs, it is the most commonly used - numerous instruments read notes with exactly this clef: violins, soprano singers, trumpets, trombones ...

As a rule, pupils and music enthusiasts learn the treble clef first, as it is the most universal, and the bass clef immediately afterwards. The old clefs, such as the C clef, have faded into the background in recent years and have been almost completely forgotten.

What is the treble clef?

The treble clef forms the basis of musical notation for pitches above C4 (American spelling), also called c1 or c' in Germany - that is, above the middle C of a piano (bowed octave). It is also called "violin clef" because the violin is usually read in such a key.

In addition, it is also called the "G-key" because the centre of the key is at the note G.

This symbol is called the "key" because without it you cannot read notes, so it is the key to understanding the scores.

What is the function of the treble clef?

To better understand the function of this key, it helps to compare the clef with a language. Each note in the pentagram would be a letter, a score would be a book.

To read this book, I have to know the language, otherwise the book is of no use to me. Only if I know the language can I form and understand words and sentences from the individual letters.

It is similar in music: a score is of no use to me if I don't know which key is at the beginning of the pentagram. Only if I know it, I can interpret the individual notes.

The treble clef thus makes notes in a score interpretable and determines their pitch.

How to draw the treble clef

The treble clef is represented by this symbol.

A cursive G, reminiscent of the Gothic alphabet. It is almost always found at the beginning of the staff.

The centre of the G-clef is in the 2nd line, as shown in the picture, if you start counting from the bottom.

Now we know: That's where the note G is.

To better understand the use of the treble clef, the notes in the treble clef and everything that revolves around this clef, it is important to also know the definition of the pentagram or staff.

What is the pentagram?

Each pentagram always consists of 5 equally spaced and parallel lines with 4 spaces between them. If you draw these lines horizontally, you get the pentagram, i.e. the staff.

In every staff there is a clef at the beginning that indicates in which "language" the score is read - i.e. where each note is located in the pentagram. If you work with the treble clef, you know that the note g1 is on the 2nd line when you start counting from the bottom.

Without a clef to indicate how the notes are to be read, the staff is meaningless and uninterpretable.

As already mentioned, clefs can be compared well with different languages - they are universal, and every musician can interpret the staff correctly regardless of his or her country of origin and mother tongue.

How to learn the notes in the treble clef

When you're just starting to read music, memorization may seem difficult. That's what happened to me when I started music lessons at the age of 10.

How am I supposed to memorise all the notes and read them as quickly as others do?

I had to learn not only the treble clef but also the bass clef at the same time because I had trumpet and electric bass lessons.

I can tell you one thing: it's not that hard! With time and a little practice, it will get stuck in your head, just like reading.

So: practice, practice and more practice!

To remember the names of the notes on the lines, you can use the following mnemonic:

For the names of the notes in the spaces of the treble clef staff, you can remember the word FACE :

Another way to find out the notes in the G clef: Just go up or down one step from the G and count. We know where the G is - after all, it's called the G clef.

One step upwards - that is, from the 2nd line into the 2nd space - corresponds to one step to the right in the piano (we are only looking at white keys here). That means I end up at the A.

This way you can easily find all notes in treble clef - even if this method requires more time.

What instruments use the treble clef?

Many instruments, especially solo instruments and generally high instruments such as violin, voice, trumpet, trombone, saxophone, flute, etc., use the treble clef. Instruments that play at lower pitches, such as the electric bass, the baritone saxophone, or a cello, use the bass clef.

However, piano players must be able to read both clefs perfectly, as each hand uses a different clef. The left hand plays in bass clef and the right hand in treble clef.

How do you get from treble clef to bass clef?

However, to be more precise, you would have to transpose down another two whole octaves to have exactly the same note in the same octave.

In the following table you can see well where the bass clef and the treble clef are actually found, namely at the c1.

Final thoughts: The treble clef and its notes

If you want to learn to play classical music, you can't avoid reading music, and for that the G clef is especially important. Be it to read scores or if you want to write your own music one day.

Therefore: The better you know the treble clef, the more fluently and quickly you will be able to read music.

Keep reading: Musical symbols and signs that everyone should know 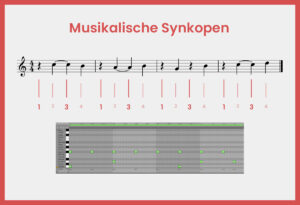