You've probably heard the term "syncopation" before - perhaps from a bandmate who knows about music theory, or from a producer trying to explain his ideas. However, the term is not always clear and often leads to misunderstandings. In this article, you will learn everything you need to know about musical syncopation, explained with practical examples. 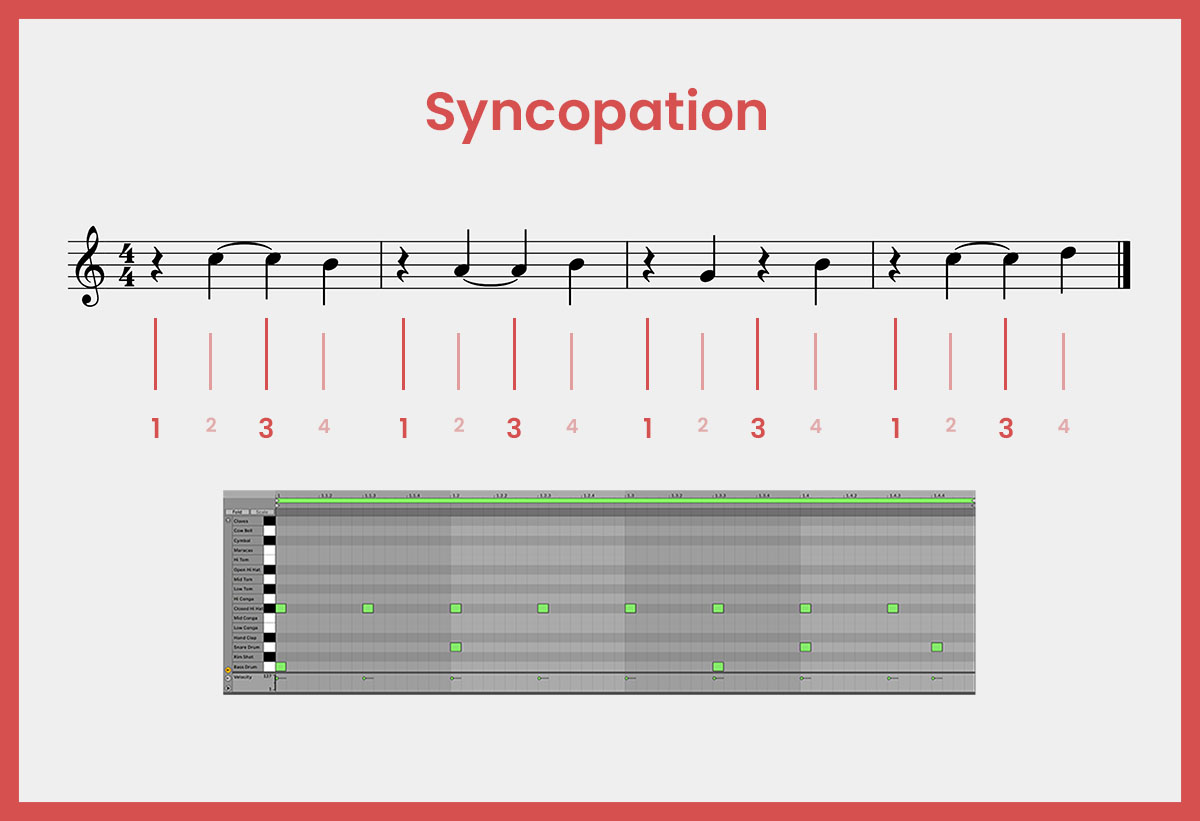 In music theory, syncopation is an effect that interrupts or disrupts the regular rhythmic or harmonic flow of a passage in a composition.

Syncopation occurs when the accent is on a weak beat instead of the strong one, or when a rhythm is split between two different beats. This can create tension and climaxes in the music and is often used to make a melody or rhythm more interesting and complex.

One of the most common forms of syncopation is the "syncopated rhythm", in which the accent is on a weak beat. In a typical 4/4 bar, the heavy beats are 1 and 3, the weak beats 2 and 4.

But these are not the only possible syncopations - if you divide the bar into eighth notes instead of quarter notes, you get 4 weak beats (offbeats).

Keep reading: Musical symbols and signs that everyone should know

You can see that this technique greatly enhances the rhythms because the listener's expectation is that the emphasis is on the strong beat - but is instead surprised by the emphasis on the weak beat.

Another form of syncopation is so-called "cross-rhythms", where two different rhythms are played simultaneously. This can be achieved by one instrument playing a steady pattern while another instrument plays a syncopated pattern over it - a classic example is drums and percussion.

This makes the music more complex and interesting, as the listener's ear is constantly torn between the two different rhythms.

They occur when the same chord is played over several bars, or in other cases when chords are arranged to create rhythmic syncopations.

Syncopation was considered a bad effect by the classical theorists of harmony and was therefore called an error (and is still considered an error in classical harmony). However, there are countless examples in the history of music in which such an effect occurs.

This is a very common type of harmonic syncopation, used especially often in contemporary pop music. It gives the song a groove - which can then be enhanced by further syncopation of the drums.

How do you create syncopation?

There are several ways to create syncopation in your music:

It is important to make sure that syncopation is used in a balanced way and not overdone, as it can make the music sound chaotic. Experiment with the different techniques and hear how they sound in the context of your composition.

In which musical styles are syncopations used?

In reggae and ska, syncopation is everywhere: these musical styles are based entirely on off-beat accentuation. The guitar plays on the 2 and the 4 of the bar, the drums leave the 1 free and emphasise the 3. So it's exactly the opposite of what you usually know from rock and pop music.

History of the use of syncopation in music

Syncopation has been one of the fundamentals of composition since the Middle Ages. Already the Italian, German and French composers of the Trecento in the 14th century used syncopation, such as the following song by Giovanni da Firenze.

The Encyclopædia Britannica states, "The repertoire of Christmas carols from the 15th Century is one of the most important monuments of English music of the Middle Ages[...] The early carols are rhythmically straightforward, in modern 6/8 time; later the basic rhythm is in 3/4 time, with many cross rhythms[...] as in the famous Agincourt song 'Deo gratias Anglia'. As in other music of this period, the emphasis is not on harmony, but on melody and rhythm."

The composers of the Venetian School (a current of the Renaissance), such as Claudio Merulo, used syncopation extensively in his toccatas.

J. S. Bach also used the syncopation as a basic instrument for his compositions. A good example from the Baroque period is this passage from Duet Aria in Cantata.

Here, syncopations are created by Bach letting the notes resonate beyond the bar until the next bar (Legato) and placing the next emphasis on a weak beat.

Schubert, Beethoven, Haydn and Mozart used syncopation to add variety to their symphonies. An excellent example of the use of syncopation in 3/4 time can be found in the opening movement of Beethoven's Symphony No. 3, the so-called Eroica.

Beethoven uses a 3/4 time signature here, but then uses syncopation to break it up in various ways:

Method 1: By moving the notes to a weak beat of the bar, such as the first violin part in bars 7-9. Instead of starting on the 1, there is an eighth-note rest and the first note is on the "1 and".

Method 2: By placing the accents on the weak beats of the bar, as is the case in bars 25-26 and 28-35. He builds subito forte , which essentially means "suddenly loud" - so that these notes stand out dynamically from the others.

This long sequence of syncopated subito forte appears later in the development of this movement in a passage. Antony Hopkins, one of the world's most famous pianists, describes this passage as "a rhythmic pattern that simply ignores the characteristics of a normal 3/4 beat„.

Method 3: By placing a rest where the listener would normally expect a note. This is the classic method that always surprises the listener and keeps the song interesting.

It is debatable whether the phrasing and accentuation of musical styles outside the Western cultural sphere can be described as syncopation. After all, the concept of syncopation is based on the fact that the emphasis is unexpected, a "Disturbance or interruption of the regular flow of the rhythm„.

In reggae, the offbeat is anything but unexpected - it is the foundation of the style. It is therefore difficult to say whether the offbeat notes played in any reggae song can be called syncopation.

Another example: the rhythmic formulas of the Ragtime (precursor to jazz) from the late 19th century were often interpreted by the majority of European and American listeners as syncopated, although this was not the original intention.

Accordingly, in African, Caribbean, and South American musical styles, it is not always possible to say with certainty whether a syncopation is actually present. So everyone is free to interpret this as they wish.